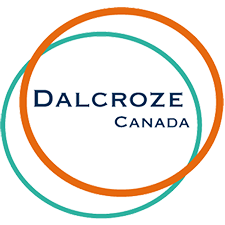 Donald Himes Memorial Scholarship
Dalcroze Canada is pleased to announce the establishment of the Donald Himes Memorial Scholarship. It will give qualified applicants some financial relief to attend Dalcroze Canada professional training programs with possible expansion of eligibility for other international Dalcroze programs in future. A limited number of scholarships will be awarded beginning Summer 2023.

The scholarship’s namesake, Donald Himes was a devoted gifted musician-- pianist, composer, dancer, choreographer, teacher and somatic practioner --from Galt (now Cambridge), Ontario. In 1952, he moved to Toronto, where he taught piano and began to study Dalcroze Eurhythmics at the Royal Conservatory of Music with Madeleine Boss Lasserre, who had begun her own studies with Jaques-Dalcroze in Geneva in 1919.  His first awareness of the work of Jaques-Dalcroze sprang from his own dissatisfaction with much of the way music was taught. He realized that developing an adequate technique and following notational instructions did not necessarily create expressive musical performance.  He found everything in the study of Dalcroze that he felt had been missing from his own musical education and after two years of study, Madame Lasserre encouraged him to go to Geneva.  He was awarded the Canada Council’s first-ever music award to attend L’Institut Jaques-Dalcroze. His time there shaped his understanding of what music was and could be. Prior to his passing in 2011, he received the Diplôme Supérieur Honoris Causa, the highest honour of the l'Institut Jaques-Dalcroze.

As an original member, he also performed at the TDT and was the choreographer of Babar, the Little Elephant, a telling of Jean de Brunhoff’s story in dance to the music of Francis Poulenc. He further choreographed for Young People’s Theatre, Prologue to the Performing Arts and the Stratford Shakespearean Festival’s 25th anniversary season.  He also made his silent opera debut as the Dancing Master in the Canadian Opera Company’s production of The Daughter of the Regiment. He also has been Father Christmas in the Canadian Children’s Dance Theatre’s Simon Sorry and the Battle for the Toys and a notable sloth annually in the Court of Miracles. From 1964-65 he starred in the CBC children’s show, Butternut Square, working with Ernie Coombs and Fred Rogers before he and Mr. Coombs moved on to Mr. Dressup which premiered in 1967. He composed the theme song to this beloved show and played on air, saying in an interview at the time of Coomb’s death in 2001, that the piano accompaniment stayed fresh because of Coomb’s continual enthusiasm for the show. He found a way of arranging Twinkle, Twinkle Little Star in 300 different ways.  Mr. Himes always felt that children responded fantastically to Eurhythmics as movement is so natural to children. He taught athletes, actors and opera singers.

He also contributed numerous articles to our Dalcroze Canada newsletter, Being Music.  His contributions to music and his promotion of Dalcroze methodology have been profound and everlasting. He once reflected — “And so Dalcroze — already 86 years in Toronto — continues; hopefully forever!”

While we miss his presence, his wonderful legacy and gift of music will live on in this scholarship.

Applications will be assessed based on both merit and need.  A limited number of funds will be awarded each year based on the following criteria:

In order to serve a number of applicants, Dalcroze Canada does not grant full scholarships.  Scholarships cover a portion of an applicant’s tuition – this is generally between 25-40% depending on the quality of the application.

Support the next generation of Dalcroze teachers in Canada!

Help support students pursuing Dalcroze credentials through Dalcroze Canada’s Donald Himes Memorial Scholarship program.  Our goal for 2023 is to raise $1,000 -- for every dollar contributed, Dalcroze Canada will match the donation until our fundraising target is achieved!

Dalcroze Canada is a registered Canadian Charity (#803742774 RR00001).  Your donation is tax deductible, and will further our commitment to promote the development of Dalcroze Eurhythmics in Canada, while providing critical financial relief to our aspiring Dalcroze students.

How do I get involved?

What will my contribution go towards?

All funds directly support qualified applicants pursuing Dalcroze credentials through Dalcroze Canada’s professional training programs. Dalcroze Canada awards funds on the basis of merit and/or need through the Donald Himes Scholarship program.  This will not be possible without your support!

All applications must be submitted online, including supporting documentation.  The following information is required: